My Job’s Not Enjoyable Anymore 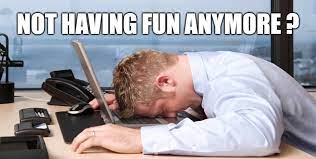 Like most conversations, this young guy and this employee retention expert got talking about work.   As we talked and he found out I was an employee retention speaker, he said to me, “I’m going to start looking for a new job because “my job’s not enjoyable anymore.”  This employee recruitment expert asked him how long he has been with his company.  He’s been there five years and used to enjoy his job a lot but no longer does.  Needless to say, this intrigued me, so I decided to probe further.

I was curious as to why he no longer enjoyed his job.  He went on to explain to me that at first, his job was challenging.  He had come into a department that was a train wreck and he was able to turn it around in 18 months.  He then asked his boss if the organization would allow him to take on additional duties.  Yes…he wanted more responsibility!!!  He didn’t ask for a raise, he asked for more of a challenge.  His boss went to bat for him, and he took on more responsibility without an increase in pay.  Wow!  And everyone says that young people are lazy.  He has asked about other roles in the organization and is willing to relocate for a different role.  The organization has been non-responsive.  This guy did not seem to be a slacker but, his request fell on deaf ears.

The final straw came when his boss took a promotion in the organization, and they brought in a temporary boss.  This boss has started to change things and has done it in an autocratic way, unlike the prior boss who asked for input and took it under consideration in his decision-making process.  According to him, the new person started messing with work schedules and things that had an impact on the people in the department.  Bottom line…one boss engaged his people and listened.  This speaks to the “R” in the C.R.A.P. retention process…Respect.  In essence, the new boss has disrespected people how they are leading.

This is a classic case of an organization and a new leader failing to respond, failing to listen, and not providing growth opportunities for an individual who wants a challenge. These are the types of people that an organization wants.  In this case, it’s going to lose an engaged, hardworking, and fairly long service employee because of multiple errors.  This was not one egregious event but a building over time.  This young guy decided after a building of incidents it was time to move on.  Why?  Because his job is “not enjoyable anymore.”

Are you concerned with the level of employee turnover in your organization?  If so, call me at 414-421-9626 or email me at jeff@humanassetmgt.com to find out how my proprietary process can reduce employee turnover by 40-80%.